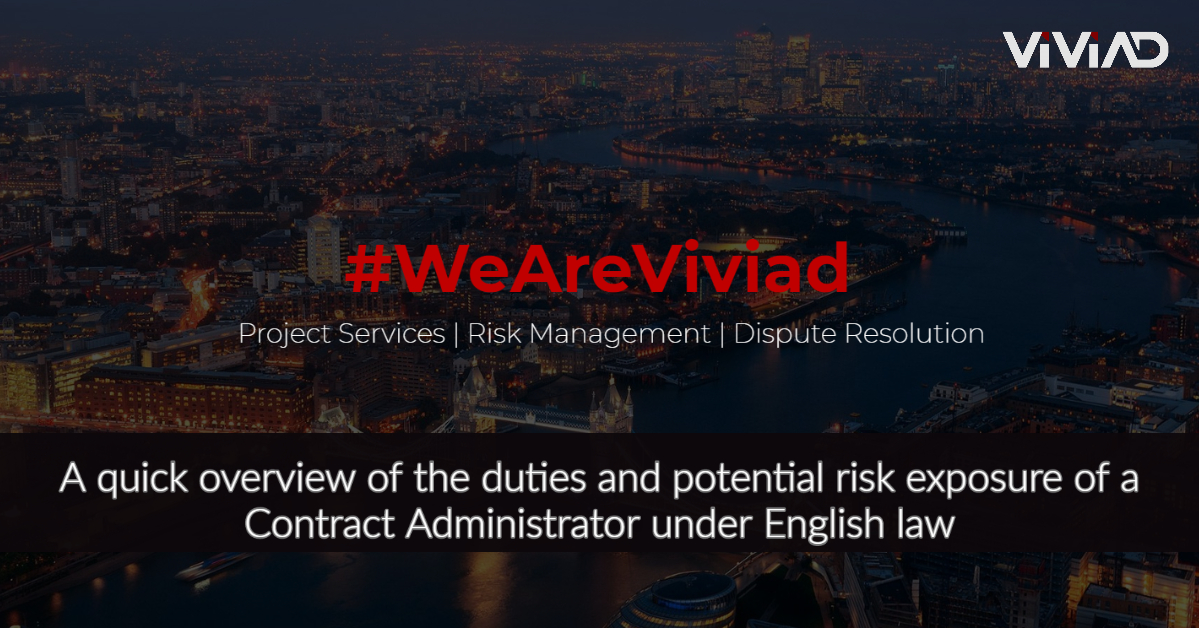 Employers have been commissioning a third party to assist them with the management of engineering contracts ‘since the 19th century’ [1]. This role may be satisfied by a natural or legal person [2] who can ‘bear varied names’ [3]. In any case, however, this person will be a professional with a skillset suited to the contract to be managed [4] and they will be conveniently referred to as a contract administrator (hereafter CA). The duties of the CA, as per Lord Reid in Sutcliffe v Thackrah [5] are twofold. If the CAs acts as the employer’s agent, he is tasked to oversee the paymaster’s interests and to administer the contract in line with his employer’s instructions. When, however, the CA is obligated to ‘make decisions about payments and time’ [6] his position is quite different and in this capacity, he will have to remain impartial. The full impact of this dualistic role and its implications on the scope of potential liability of the CA, acting especially in the latter capacity, are considered below.

The duties related to the CA’s ‘ministerial or clerky’ [7] tasks are straightforward from the employer’s end due to an agency relationship existing between the two. [8] The agency denotes here ‘an authority … in one person to create legal relations between a person occupying the position of a principal and third parties’ [9] which is encapsulated in the terms and conditions of the CA’s appointment, where his powers are found [10] (although a CA’s prerogatives may also be stipulated in the contract). [11] The obvious administrative powers are as follows: the power to issue variations, to instruct the contractor as to the manner of performing the work [12] and to request/release information. [13] The CA is obligated to fulfil these duties, [14] with due skill and care, [15] and as per the terms of his appointment and the contract. [16] If they are not discharged in full, the CA is in breach of contract [17] and, accordingly, the employer will be entitled to a remedy. The CA’s duties towards his employer in contract will correspond with those in tort. Although, as per Pacific Associates Inc v Baxter, [18] differences between both grounds of claim will manifest mainly with regards to technicalities. Accordingly, based on Sutcliffe, if the CA certifies excessively, he could be liable to his employer for negligence. Similar conclusions were reached in Astley v Austrust Ltd. [19]

Interestingly, in his capacity as ‘employer’s agent’, the CA is still exposed to the risk of a claim by the contractor, despite no privity of contract between the parties. So long as the contractor has undertaken work, he may have a claim against the CA founded on a promissory estoppel. [20] The arrangement between the employer and the CA may also include a warranty regarding the performance of the latter to allow for application of Trident General Insurance Co Ltd v McNiece Bros Pty Ltd [21] (in that the employer is a trustee of any promises made by the CA and the contractor is their beneficiary). Lastly, the contract may allow for the application of the Contracts (Rights of Third Parties) Act 1999. If no contractual remedy is available, the contractor may sue the CA under the Hedley Byrne [22] principle so long as misrepresentation was made by the CA on which reliance was placed and pure economic loss was suffered. This route was suggested in Jarvis & Sons Ltd v Castle Wharf Developments Ltd [23] and in Galliford Try Infrastructure Ltd v Mott MacDonald. [24]

When the CA, acting under the contract, undertakes decision making function, ‘things change’. [25] In this semi-judicial capacity (which may be uncomfortable [26]to the CA because of his obvious ties with the employer) he no longer acts as his paymaster’s limb and is no longer obligated to put his commercial interests at the forefront of his decisions [27] but is ‘obliged to act fairly’ [28]. This is because he is not, to quote Lord Morris, ‘employed by the owner to be unfair to the contractor’. [29] This will occur, for instance, in a case in which the CA certifies contractor’s work, or, where the CA decides with regards to party’s rights and obligations. [30] And this duty was underlined by a number of authorities from Panamena v Frederick Leyland [31] (duty to act independently) and Perini v Australia [32] (duty to act fairly and justly and with skill to all parties) to London Borough of Hounslow v Twickenham Garden Developments Ltd. [33] In the last case, Megarry J highlighted that the CA is not required to ‘observe the rules of natural justice, giving due notice of all complaints and affording both parties a hearing’, but he ‘must throughout retain his independence’ in reaching his conclusions.

Assessment of whether the CA’s conduct meets the above requirements is objective and subject to conjecture. [34] Thus, ‘impartiality’ [35] is a flexible concept although the common law has provided some semantic ramifications for this. For example, an erroneous view of the CA was not seen as a breach of this principle. [36] In the same way, a strongly opinionated CA will not be considered impartial. [37] Finally, ‘impartiality’ will not be tainted by employment-type relationship the CA might have with his paymaster so long as the CA will not submit himself to the employer’s control. [38] This requirement for impartiality is also interwoven into the majority of standard form building/engineering contracts. [39] One exception is the NEC3, which contains no ‘express requirement … for the project manager to be impartial’. [40] However, the outcome of Costain v Bechtel [41] confirmed that even if such a duty is not explicitly imposed on the CA by the contract, it ought to be implied. In that case, Jackson J stipulated that principles developed by Sutcliffe should be applied to any type of contract and that: ‘It would be a most unusual basis for any building contract to postulate that every doubt shall be resolved in favour of the employer and every discretion shall be exercised against the contractor’.

If ‘impartiality’ is maintained by the CA, the risk of an action against him is limited. To paraphrase Lord Reid, if the CA has not been negligent in issuing the certificate, or is not guilty of collusion or partiality, [42] he is practically ‘immune from suit in contract or tort on public policy and statutory grounds’. [43] In other words, in the majority of cases, he simply ‘cannot be impeached for mere negligence, or mere mistake or mere idleness’. [44] This line of thought was well presented by Pacific Associates v Baxter [45] where the Court of Appeal declined to impose on the CA duty with regards to the contractor arguing that the parties to the contract could arbitrate to establish the sums which should have been certified and followed in Leon Engineering and Construction Co Ltd v Ka Duk Investment Co [46] and John Holland Construction v Majorca Projects. [47] However, if the CA has been clearly negligent [48] in his certification duties (over- or under-certified work) he may be liable to the employer for negligence. This principle was laid by Sutcliffe [49] which overruled Chambers v Goldthorpe [50] and confirmed that a negligent CA will be liable to his paymaster for breach of the obligation to exercise skill and care and for economic loss. In my view, this was a brave signal and it essentially indicated that in the court’s mind the impartiality of the CA will not be interfered with by his personal liability. Saying that, there can be also truly extraordinary occasions, where the CA may become liable to the contractor on the same basis. [51]

Analogically, if the impartiality of the CA is influenced by either of the parties, his decision will render no effect in law. This was well exemplified by the outcome John Mowlem & Co Plc v Eagle Star Insurance Co Ltd, [52] where the employer was said to be liable for unlawful interference with the contract and issue of the certificate. The same may also happen if the CA has intentionally under-certified the work conducted by the contractor, whilst aware that his paymaster is unable to pay or does not wish to pay. [53] The CA will also be removed from his role in cases where he has ‘closed his mind to the matter he was to determine’, [54] where he behaved unreasonably towards the contractor, or where his actions constitute misconduct. In such circumstances the CA’s decision will be subjected to reassessment. A gateway to do this was opened by Brodie v Cardiff Corporation, [55] and supported further by the Arbitration Act 1934 (which allowed for judicial review of the CA’s decisions). The courts in Tarmac v Esso Petroleum [56] and Beaufort Developments v Gilbert-Ash NI [57] reaffirmed this position. Nowadays further opportunities for review are permitted by the Housing Grants, Construction and Regeneration Act 1996 and the Local Democracy, Economic Development and Construction Act 2009.

[35] Commentators have, however, referred to ‘independence’, ‘fairness’, ‘even-handedness’.

[48] Unless the employer is aware of the CA’s negligence and does nothing about it as per Panamena Europea Navigacion v Joseph Leyland  [1947] AC 428.