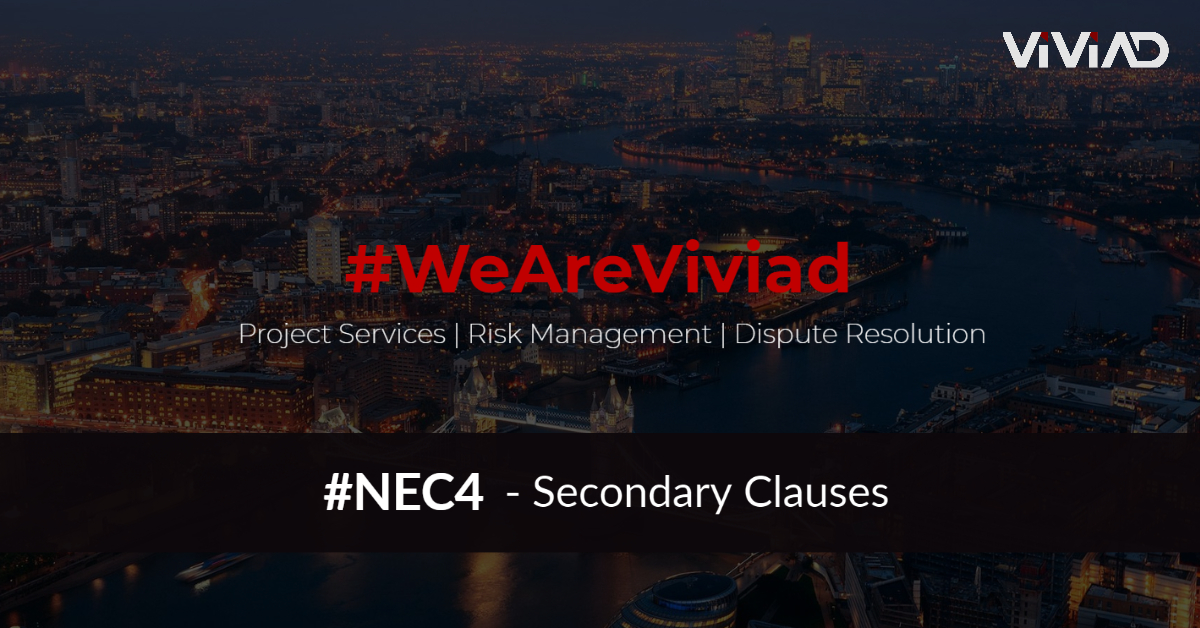 So far it is clear that NEC4 harnesses risk via the contract option and integrated EW and CE mechanisms, with an avenue to add a completely bespoke provision via Z clauses. There is one more way in which risks can be allocated in NEC4 – secondary clauses. As in the earlier editions of the contract, the newest edition is not intended to reflect every aspect of the contract in core clauses as requirements may vary. These clauses – with a similar standing to other NEC clauses – require the insertion of the desired detail. As per Eggleston, these are usually ‘considered for inclusion in contract after the primary decision on which main option to use has been taken’.[1] All these clauses are relatively short, and, as Gould notes, they provide for instances that are ‘commonly encountered and therefore may be required in the contract’.[2]

Detailed consideration of all secondary clauses is beyond the scope of this article. However, it is worth looking at the impact of some of these provisions so as to acquaint ourselves with the impacts they might render. A common clause in the case of option A, B, C and D is X1, which allows parties to allocate risk of inflation. If this option is not taken, for options A and B the price of the contract is non-amendable and the entire risk related to cost variability is carried by the contractor. Under options C and D the risk of inflation primarily shifts onto the client, who is obliged to pay defined costs, but later to the contractor via the pain/gain mechanisms. Application of X1 makes this allocation more precise and index-linked, as a consequence of which the ‘price of the work done to date’ will be adjusted for inflation (for options A and B under X1.4 and for options C and D under X1.5). X2 is similarly useful as it shields the contractor from the detrimental impacts of changes in law, tax regimes or duties. A similar effect is created by the application of X3, based largely on the World Bank principles, which fixes the exchange rates for any currencies that are used as alternatives, or along the main currency of the contract. The effect is that the contractor is always remunerated accurately in line with his or her initial quotation.

Secondary clauses can also be used to seek additional security through, for example, application of X4 or X13 – the former relates to ‘ultimate holding company guarantee’ and the latter to performance bonds. In this way, the client can protect him or herself from the contracting organisation’s insolvency (the financial standing of companies is notoriously difficult to assess) and additional costs attributable to such an event (often catastrophic to the project’s schedule and cost plan) and/or ensure that the work is proceeding in an acceptable manner. That being said, NEC4 does not openly prescribe the forms of such guarantees or bonds.

Lastly, a number of secondary clauses can be selected to stimulate desirable behaviours, which in turn may reduce the overall risk exposure, not only of the parties to the contract, but also of the entire venture. This may lead to the desired benefits for the parties. For example, through X6 (bonus for early completion) the client can incentivise the contractor to finish as early as possible. Analogically, by applying X17 (low performance damages), the client can also penalise the contractor for substandard work. With regard to secondary clauses lowering the risk of the entire project, consideration should be paid to X10 (information modelling) and X12 (multiparty collaboration). The first of these clauses was drafted in order to make NEC4 compliant with BIM standards and requirements. In the past, CIC BIM protocol was implemented via custom Z clauses developed under the auspices of ICE. The benefits of using BIM are clear and include faster and more accurate risk identification and proactive mitigation abilities. The same is applicable to partnering – collaborative projects are delivered more efficiently with a reduced occurrence of disputes.