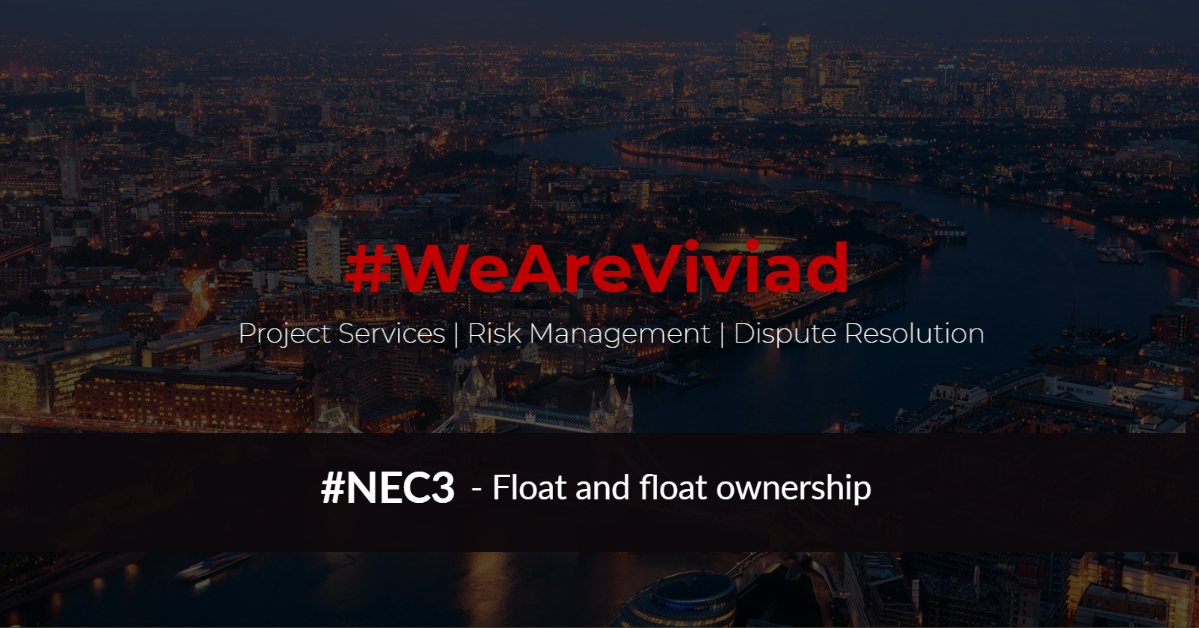 Understanding the concept of Float and Float Ownership is critical to those administering NEC3 Engineering and Construction Contract. Unfortunately both concepts are often misunderstood. I have heard the phrase “Contractor owns the float” too many times. Let’s look into this in more detail.

Society of Construction Law Delay and Disruption Protocol describes Float (sometimes also called Slack) as “the amount of time by which an activity or group of activities may be shifted in time without causing delay to completion”. Float is calculated by subtracting the time necessary to perform a task from the time available to perform it. There are a few types of float or float related concepts recognised under NEC3.

Now that we have settled the basic definitions let’s look into few areas of concern that I have noticed coming up every now and then.

Is it necessary to show the Time Risk Allowance in the Programme under NEC3?

NEC3 Clause 31.2 is clear that the Contractor shows on each Programme which he submits for acceptance provisions for Float and Time Risk Allowances. Both should be also assessed with every revision of the Programme and any significant erosion of Float or visible Negative Float should be clearly explained in the Programme Narrative. Remember that accounting for Time Risk Allowance gives the Project Manager the reassurance that the risks for each activity have been considered.

Why is it critical to understand the types of float and their ownership?

Float is a fluid concept.

Free Float and Total Float are recalculated every time the Programme is scheduled and therefore change with every iteration of the Programme. That’s where it becomes tricky for the Contractor as well. If the Contractor fails to recognise activity float as Time Risk Allowance he risks it being used up by events for which he is not responsible. Time Risk Allowance should be protected in the same way as Terminal Float.

Is Time Risk Allowance “lost” if not used on an activity or can it be carried over?

Clause 32.1 requires the actual progress achieved on each operation and its effect upon the timing of the remaining work to be shown in the revised Programme. If a task finishes without using its Time Risk Allowance and another task can start without disruption then the answer is yes. Any unused TRA from activities which are not on the critical path will appear as float and then become available to who ever (Contractor or Employer) gets there first.

Interestingly if Time Risk Allowance is not used and the Programme is rescheduled this may result in Planned Completion shifting to an earlier date, which brings me to the next question.

What happens to Terminal Float if Planned Completion shifts to an earlier date?

If Planned Completion moves forward due to unused risk allowance and the gap between the Planned Completion and Contract Completion becomes greater, this can be “banked” as Terminal Float. It is a common misconception that once the programme is baselined, the terminal float is set in stone until such time that the Contractor decides to use it.

Finally, can the Terminal Float be reduced by the Project Manager?

If the Project Manager wants to reduce the Terminal Float, he can instruct the Contractor to provide quotation for acceleration. This is done via mechanism described in Clause 36 – Acceleration.

Have you had any interesting arguments about float in your organisation? Perhaps there is a float-related issue that you’re not sure how to deal with? Let’s have a chat in the comments section or in person.